I want to be a dead pile of dirt,
From which no plant grows,
No life flows,
It's eternally dull,
And null shall it be,
Infertile never meeting star dust!
Posted by Andaleeb at 4:29 AM No comments:

Email ThisBlogThis!Share to TwitterShare to FacebookShare to Pinterest
Labels: poetry

Powerpuff Girls, not damsels in distress

Imagine passing through a huge crowd of men without getting harassed. I squeezed past through hundreds of men today at the Ashura procession, which I attended after 10 years. Not a single problem. Nobody tried to grab my breasts, nobody touched my thigh, nobody pushed me intentionally, neither was I ogled at in a lecherous manner, I heard no cat calls accompanying those stares. I wish men can behave in this manner every day in Pakistan.

On a regular given day in the biggest metropolitan of Pakistan, I cannot go on the streets without being apprehensive of what I will face today, and before people start commenting about hijab, niqab etc. Been there, done that, makes no difference at all.

During my university days I used to wear a huge dopatta, making sure my whole body was just a wisp of cloth and nothing else. Still fingers were poked at me in G17, W30, Shiraz Coach, Khan Coach etc. Cat calls were made while I crossed the road. Men flashed their d**** at the girls standing on bus stops. And before the elitist jump up to say, those must be the uneducated, poor people, who have had no exposure, sorry to disappoint you. On the streets, a lot of these educated and uneducated are the same. Savages, for lack of a better word! There was hardly a day which passed without a single incidence of sexual harassment. Er, despite the huge dopatta. Result? I stopped denying myself the right to move about freely and comfortably because some men cannot control their hormones.

Being a shia I never used a niqab, except while traveling in the desert. However, the recent influence of the theocratic Iranian regime, some shia women have started covering their faces in Pakistan too. (I protest – this was one of the things I appreciated in Shiaism) A lady who received a gift of a niqab from Iran experimented with the idea and decided to come back from her teaching job at 3pm in the niqab. Not to be forgotten here is her black full-length abaya. While she was walking home from the bus stop, a man on a motorcycle stopped ahead of her, and invited her to sit behind him. She entered the shop nearby to avoid her assailant. Result? No more niqab, at least during day time.

At this stage, we might have to deal with the argument that it is still better in Pakistan, and on one complaint all the guys, who earlier were sitting chewing paan and enjoying a lady’s discomfort, stand up and become the caretakers of the woman’s honor. Hogwash! It doesn't happen as often as it might have happened during your mother’s days. How I know this? Because I still use public transport.

Although I have no problems if some women do ask men for help, in my opinion we need to be trained in self defence, and realize that ‘men’ cannot be relied on all the time to come to our aid. The whole damsel in distress idea is not only clichéd, but out of fashion now. You show vulnerability, there will be 10 more lechers to take care of.

PS Just to set the record straight, same sex harassment is also increasing in public transport. It is not very common among women yet, or I haven’t heard of more than 3 or 4 cases, but among the men it already should be a cause of concern.
Posted by Andaleeb at 2:26 AM 2 comments:

You can support Imran Khan, Altaf Hussain, Shehbaz Sharif, Obama, Romney, Bal Thackery, Ahmadinejad or whoever else we have available from the concentrated gene-pool or cesspool of humanity, I don't care. But do not lose your humanity in your 'support for these genetically stunted creatures'. Do not on one hand be anti-drone and on the other hail army operations in other parts of the world. Do not say you are a human rights supporter if you think that giving capital punishment is justified. Do not be aggressive against other beliefs, killing them, maiming them and rendering them clueless as to what hit them, and then hold the non-believer responsible for being aggressive towards you visually, virtually or graphically.

Supporting political or religious ideologies beyond humanity is nothing to be proud of. Killing to wipe the 'other' off the face of this earth is nothing short of a genocide. Perhaps the evo-psychologist would love to say this is genetic and that this is the exact gene responsible for wiping out the Neanderthals 30,000 years ago.

Oh and please do not say if it wasn't for the boob-baring women, there would be no earthquakes or genocides. For otherwise your house should be in a quake every time someone took a shower at home, especially if that someone was a woman. Or you would be taking baths in your own relatives blood. Spare me your shenanigans on how depraved modern society is when it comes to teen pregnancy and sexual orientation, for even baboons have better understanding then that. And if you think I will be impressed about your knowledge on Gaza and the Iron Dome, or even how infowars has clarified Osama's death which took place eight years ago, let me be absolutely rude here, I don't give a fuck!

Violence is not the answer. Not in any form. Be it from organized military, or from the 'extremists' against the innocent. Resistance does not mean violence. Need of the day is not to sit in your drawing room asking what would become of this world while sipping chilled pepsi, beer, vodka whichever you prefer, but that you move your bum and get to work.

You ask me when will it end? I say, when instead of asking 'when will it end' you are on the streets, next to me, fighting to make it end.
Posted by Andaleeb at 8:30 AM 4 comments:

Recreating creativity is one hellova task!

Will be available on sale soon. For details check: https://www.facebook.com/needlecrafts.products
Posted by Andaleeb at 9:09 AM No comments:


My brain,
A horse,
An untamed one at that,
A stallion, let lose in a field,
Not the elysian fields,
Just not yet,
There is time love,
He said, as he turned his head,
To gaze at the glistening blade,
Blade or shard?
What was it?
A shard trampled in the hooves,
Yes, its gone,
No longer does it haunt,

Be free he tells,
Free of what?
Humans,
Anything but them,
Just not yet,
He smiles again,
That kind one,
Its still too far to go,
Let them be,
Ones who can't wait,
Let them go,
Mere hindrances,
Nothing else,
Step on, ahead,
Beautiful horse!

It is sad when someone who identifies himself as a feminist, tries to validate patriarchy and heteronormativity, justifying it via evolutionary psychology. The person not only sounds like a rape apologist, but by virtue of limiting gender roles to evolutionary psychology, he even gives fodder to the pro-burka/hijab bandwagon.

Quote from Loneliberal's blog: "Some behaviours  however, are so deeply ingrained within the male psyche that fixing them could be a pathological change."

Perhaps our resident evo-psychologist is more comfortable to believe that the injustices are perpetrated due to nature and not learned behaviour. Therefore, patriarchy being natural, men have no responsibility when it comes to not being misogynists. Moreover, trying to reverse patriarchy will actually be unhealthy. Since it is healthy and natural.

Here’s another quote from the comments, “Drooling at the sight of naked women is not a learned response. I cannot imagine an adolescent male being “taught” to have an erection at the sight of a sexually-appealing female. Or a female “taught” to be turned on at the sight of a handsome man. These are instinctive behaviors. Regardless of how much he is educated, a heterosexual male would still retain his preference for tighter skin; firm, reasonably large breasts; and large, gynecoid hips (though he may deny being titillated by them, due to social restraints).” 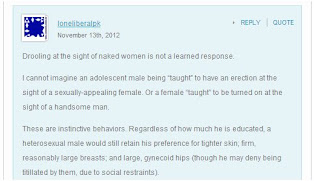 The guy is not only stereotyping what must and does excite an individual sexually, but is also stating that one who does not fit in this box, is actually doing so due to social pressure. Basically, whatever doesn't fit in the dominant heteronormative paradigm, defined by evolutionary psychology is learned behaviour. What I would advise the author of this blog, is to first get a better understanding of what feminism is and isn't.

PS: Perhaps, it would be so much better to cover women up in a shuttlecock burka, since men cannot help but get erect at their sight. Forget about lesbians, gays, trans-sexuals. Hell with LGBT people!
Posted by Andaleeb at 10:55 AM 7 comments: