Apparently male journalists are threatened so much by women journalists calling out their bullshit online, that they cannot help but send threatening messages on Facebook. Here's an example of a threat received from Moazzam Raza Tabassam for calling him out on my friend Zeeba's post about the treatment meted out to women in IDP camps. This guy is supposedly an editor of Islamabad Political as per his Facebook page.

The reason Zeeba and I deserve this attention is because we refused to be 'diplomatic women' who live in the Pakistani 'intellectual society', and we dare to ask some 'male chauvinists' what they mean when they are being 'intellect-chawals' (A brilliant term coined by another friend of mine Mariam).

Here's the brilliance of our 'dear experienced journalist Moazzam' again: 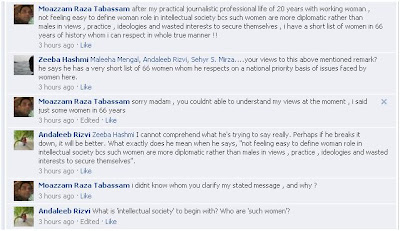 Just in case this screen-capture was not enough for the delight of your mental-senses. Do read the rest of the thread for some more brilliant chawalness here. Unfortunately, Zeeba deleted his attack on my Shia background to protect me from feeling hurt and offended. But I managed to get that information too.

I suppose men just cannot tolerate women having brains, because they are conditioned into accepting women only as showpieces. The moment women break that stereotype of being only good to look at, their male privilege is under threat and they have to prove their maleness by hook or by crook.

This week was not depressive when it started, but one after another SOS call from women or their relatives about domestic abuse, physical violence and battery are getting to me now. The first one was from interior Sindh. Although the lady is safe now, she faced not only perpetual threat of rape from her father-in-law, but constant abuse and pressure from her in-laws to give in to their illegal demands.

She was emotionally, physically and financially used by not only her husband but in-laws as well. Moreover, despite having relatives in the Sindh Police Department, the woman was not helped because the policemen in her family fear their own daughters will be targeted and threatened. This is not the first such case, countless cases of abuse and violence are scattered across the globe, where women are at times left to fend for themselves. Which brings me to the next message I received from someone who I used to consider a friend until this particular incident.

A lady in Jeddah was not only being abused, but also being held hostage in the bathroom by her husband. 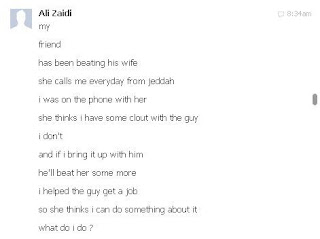 The person who sent me the message asked if I could give any resources that the lady can use to find help. Since it was an SOS call, I asked my friend Ayesha Sultana, who gave the following information:

The number was forwarded to the guy, who was the only person the victim called for help. 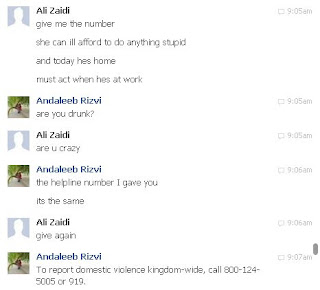 The guy reported that the victim is too paralyzed with fear to even call police. Therefore it was suggested that he can give the victim's number so people from the helpline can contact her themselves and do the necessary. However, the guy refused to do so, stating it is a family matter, and needs to be handled differently. 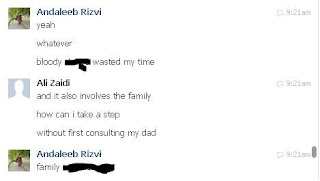 Another reason he gave for not giving the victim's number, who was too traumatized to call police or the domestic abuse helpline herself was that the husband is the sole breadwinner of old parents. 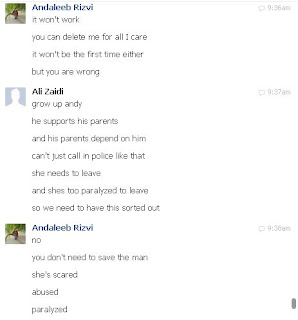 Earlier, I had not thought of blogging this exchange. But I think I was wrong. People who protect or help abusers in anyway need to be exposed and publicly held accountable for not doing what is right. We do not know how the lady in Jeddah is, if she received any help or is still being held hostage by her abusive husband. As for the last exchange I had with Ali Zaidi, it went as follows: 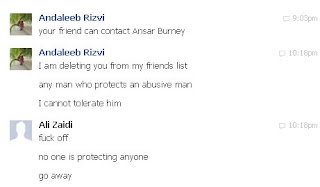 It seems violence against women will not stop any time soon. Today, I received another message from a distraught brother, whose sister is being abused physically and verbally in Bahrain. The husbands in all three cases are highly qualified individuals, who are pursuing successful careers in engineering and finance.

Posted by Andaleeb at 6:17 PM No comments: