We only knew him as Baba. He was my paternal grandmother's house help. A World War I and II veteran, who lost his family in India to a plague in the 1930s, came to Pakistan in 1947, and met my grandmother in 1950. (I'll have to confirm the dates with my mother - it was the year my uncle was born and my grandmother, who was a school teacher had to rejoin her job after maternity leave)

When he knocked on the door, he looked very frail, so Ammajee tried to offer him food. But he refused. His self respect was great and he felt insulted by her 'charitable' offer. Instead, he asked her for work. My grandmother needed a nanny and a house help, so she asked Baba if he can cook. He responded in affirmative to cooking, cleaning and taking care of a newborn. Hence, he was hired.

His life, from what I have heard revolved around my uncle, whom he took care of for 16 years. One day, Baba disappeared and nobody was able to trace him. My grandparents lived in Jacoblines Quarters - one of the many areas inhabited by Urdu speaking migrants, apart from Martin Quarters, Jahangir Road Quarters, Abyssinia Lines and other neighbourhoods in the old city. In the 70s my grandparents resettled and later the quarters were demolished to make way for family residential apartments, measuring merely 45 square yards.

My mother tells me that one day, while my father was passing through the area, he found Baba living in a hut near some rubble. He had broken his leg, and had taken to begging. He also was suffering from some memory loss and chanted 'Allah hoo' almost all the time. My father brought him home, where his condition, despite visits to doctors deteriorated, and he continued to beg in our neighbourhood.

I remember as a kid, many people told my parents to hand him over to Edhi, since he was not even a relative, but a ‘mere old servant’, who begged and made everyone feel ashamed. However, my parents persevered. He stayed with us, despite his cursing and hurling insults at my mother and aunt for not giving preference to ‘boys’, for not taking enough care of children, and for not getting him the desired ‘tambaakoo wala paan’ in 25 paisas. He loved paan, apart from begging to save for his ‘funeral’.

Often, his demands were to buy him two Zahoor Rajajani Tambakoo Paans in 50 paisas. Even though, we told him countless of times that Baba, a paan costs 75 paisas now, and not 25. Since he never listened, we always used to cover up for the missing money. Baba loved feeding us kids ‘nihari roti’ with the money he begged. And of course, we loved eating it with him too - despite our runny noses and hiccups.

Baba was an era, almost a century, who left us when he was 95 years old. That was the first time when I found his last rites had to be performed in a different way. My chacha went to a Sunni maulvi to find out if he could be taken care of at an Imambargah, since we were not keen on sending him to Edhi. At that time, Sunni mosques were not equipped to deal with dead bodies. This was early 90s. He was a Hanafi Sunni, who had no trouble eating niaz, nazar or giving fateha. He had already bought a white shroud from begged money, which he had, a few months ago given to my mother with instructions for his burial.

Baba wished to be buried the Sunni way, and his grave was to be left un-cemented. With permission from a relevant Sunni maulvi, Baba was bathed and shrouded at an Imambargah, amid a mixed Shia and Sunni funerary gathering. He was buried the Sunni way, with the help of the Sunni side in our family. Nobody had a problem with the way it happened. Nobody had trouble setting foot in the Imambargah at that time, and nobody asked if he was a Deobandi, Ahle Hadees, Barelvi or Wahabi. We were tolerant then!
Posted by Andaleeb at 5:12 PM No comments:

This is one of the articles that started it.

Why Is Everyone Getting Naked? Rashida Jones on the Pornification of Everything

For many, Rashida Jones has actually pontificated by raising the questions she did manage to raise, despite the whole idea that women’s emancipation lies in the act of rubbing their clits and baring their boobs in public. So here I am, wondering, how Rihanna's clit will get me emancipated? Or make men question how unjust society is towards women? How does Miley's butt swinging and tongue flicking at a crowd make people question taboos about women's sexuality? Oh for Pete’s sake, how do even FEMEN’s bare boobs make Muslim fanatics less fanatic?

These are the questions that keep nagging at me, just like Imran Khan’s constant demands to block NATO supply and to shoot down Drones does. I feel the polarity of our society is becoming too much to bear. Here’s another wink worthy, boob jiggly theory. ‘Trolley Problem’, which allows one to support drones that kill innocent people as collateral, but at the same time, gives them leeway to oppose a death sentence. Ah the contradictions and lovely alibis one can find theoretically in the archives of Wikipedia the great.

And if that were not crazy enough for you, try Jezebel. Where Erin Gloria Ryan claims that 'Smartphones Are Made For Giant Man-Hands'. Oblivious to I guess the countless smartphones available in the market that vary in size, specs and portability, as well as the varied physiques both men and women can possess.

Yes Aamer, either I need to be a zombie, or I need a spaceship.
Posted by Andaleeb at 2:55 PM 1 comment:

A friend sent a message today to report a page run with the title 'Yar araam sai daalo dard ho raha hai', which literally means 'Do it gently, its hurting'. A close look reveals that it is to do with child pornography. The page is being run as a "Community - Payaray larkay jin ki gaand maarni chahie" - Pretty boys, who should be sodomized. Here's a screen capture for further proof: 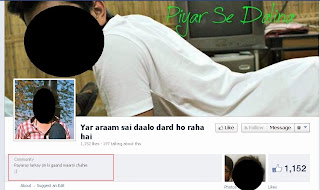 After reporting the page, I suggested the friend to post the link in our group Pak Feminazi Drones, so more people can report the matter to Facebook. A series of reports followed, all of which received the same answer from Facebook community. Interestingly, as Mariam Goraya pointed out, though Facebook has a problem with images of nipples, its all right to have child pornography on the social platform, as long as its not written in English. Seriously, you need to look deeper into the language issue Facebook. 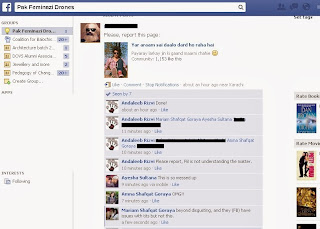 Countless images of young boys are splashed across the group, inviting, inciting, enticing for only pedophiles. I am feeling disgusted even writing the matter, but unfortunately, the multiple responses by Facebook, not just to me, but others as well, left me no choice but to blog about the matter. Check the responses here: 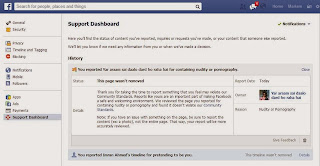 Since the social media website found nothing wrong with the content on the page, and instead told us:

Note: If you have an issue with something on the page, be sure to report the content (ex: a photo), not the entire page. That way, your report will be more accurately reviewed.

I thought, all right, fine, maybe reporting a picture with a child's image, along with an unsettling title would make Facebook realize the problem. And I reported an image - https://www.facebook.com/photo.php?fbid=1420373504850981 - that did not change much either. The title simply means, "Take off your knickers and lie on your stomach" (Uggghhhh - hire some people who know Roman Urdu Facebook, please!!!!)

Unfortunately, the result of this report was the same as well. Facebook community standards cannot be violated when using Roman Urdu. Since probably they do not have enough competent people on board to decipher language. They have people who can pinpoint images of breastfeeding, but not these. 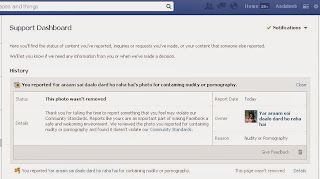 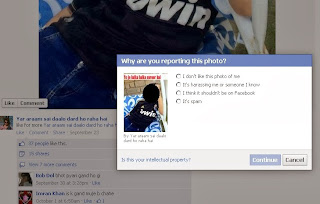 If you choose option two "It's harassing me or someone I know", this is what Facebook has to say: 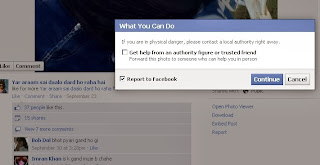 And you are back to square one, "Report it to Facebook" - Continue: 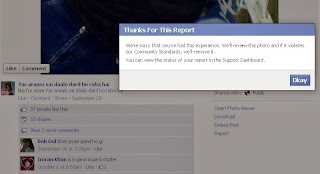 So here we are again, back to square one. Let's wait for another Facebook message, "Thank you for taking the time to report something that you feel may violate our Community Standards. Reports like yours are an important part of making Facebook a safe and welcoming environment. We reviewed the page you reported to containing nudity or pornography and found it doesn’t violate our Community Standards."

PS The wait is over. Here we got the expected Facebook response: 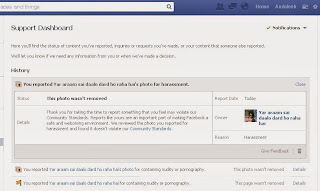