Je suis Charlie or not?

Charlie Hebdo (was) racist, islamophobic, misogynistic, etc, to say the least of their so-called satire, BUT I condemn the killing of their cartoonists and other contributors, as well as the killings of the cops, especially the Muslim one. He died defending those who 'ridiculed' 'his' religion. Killing someone for not agreeing with our ideals is wrong, BUT one should not 'hurt' the sentiments of millions who revere the Islamic State Khaleefa, err...the prophet.

I condemn the killings of Charlie Hebdo, but what about the freedom of speech for the Palestinians who have been stopped from showing solidarity by the French government? It is wrong that terrorists (anybody who kills someone in the name of Islam does not have to be a Muslim) killed those who worked at Charlie Hebdo, but they should not have drawn the prophet (pbuh). If France cares so much about freedom of speech, why did it ban the advertisement showing Jesus as a woman? If France was not racist and had assimilated the 'Arabs' well, those two (killers) would not have done what they did.

These are some of the comments and ideas strewn all over my Facebook and Twitter timeline. I thank thee for such enlightenment. The 'if' 'but' arguments highlight the duplicity of the human race so beautifully. It is like a breath of fresh air, or the first shower after scorching heat. Call me callous, but I want to compare this moment of those with pens versus those with guns to the Palestinian youth throwing stones at the Israeli military. That is how unmatched the rivals were and are and will remain perhaps.

Deaths do not matter. Be them of cartoonists or those of killers themselves.

Actually, it is neither about the killings of Charlie Hebdo workers, visitors and the cops who were simply there at the wrong time, nor is it about those who killed a dozen people because of a certain mindset. None of this matters any more. What matters are the narratives and counter narratives. What matters is the fact that it is not as important to say Je suis Charlie as it is to say je suis 'so and so...'

It is about France inviting Netanyahu and Merkel to the solidarity rally, the banning of the veil in public, war in Syria and Iraq, Western hegemony against the Islamic world, their double standards and the right-wing narrative that will further fuel the anti-Muslim mindset in Europe.

Human deaths are no longer as valuable as today when all and sundry are looking to collect martyrs. As if the deaths of thousands of people of colour at the hands of Taliban, Boko Haram, al Qaeda, Daesh were not enough, the militant Islamists have given the European far-right the right number of martyrs to push for anti-immigration laws, job cuts, racism, and further reinforcement of the 'savage Muslim' idea.

And if that was not enough, there are people of the Pakistani Awami Tehreek in Peshawar, who are already paying homage to the killers Said and Cherif Kouachi; and Charlie Hebdo with all its activism for equality has actually died in the fight amid the far right Muslims, Jews, Christians, and their apologist leftists... Even if a cartoon on the cover says Je suis Charlie! 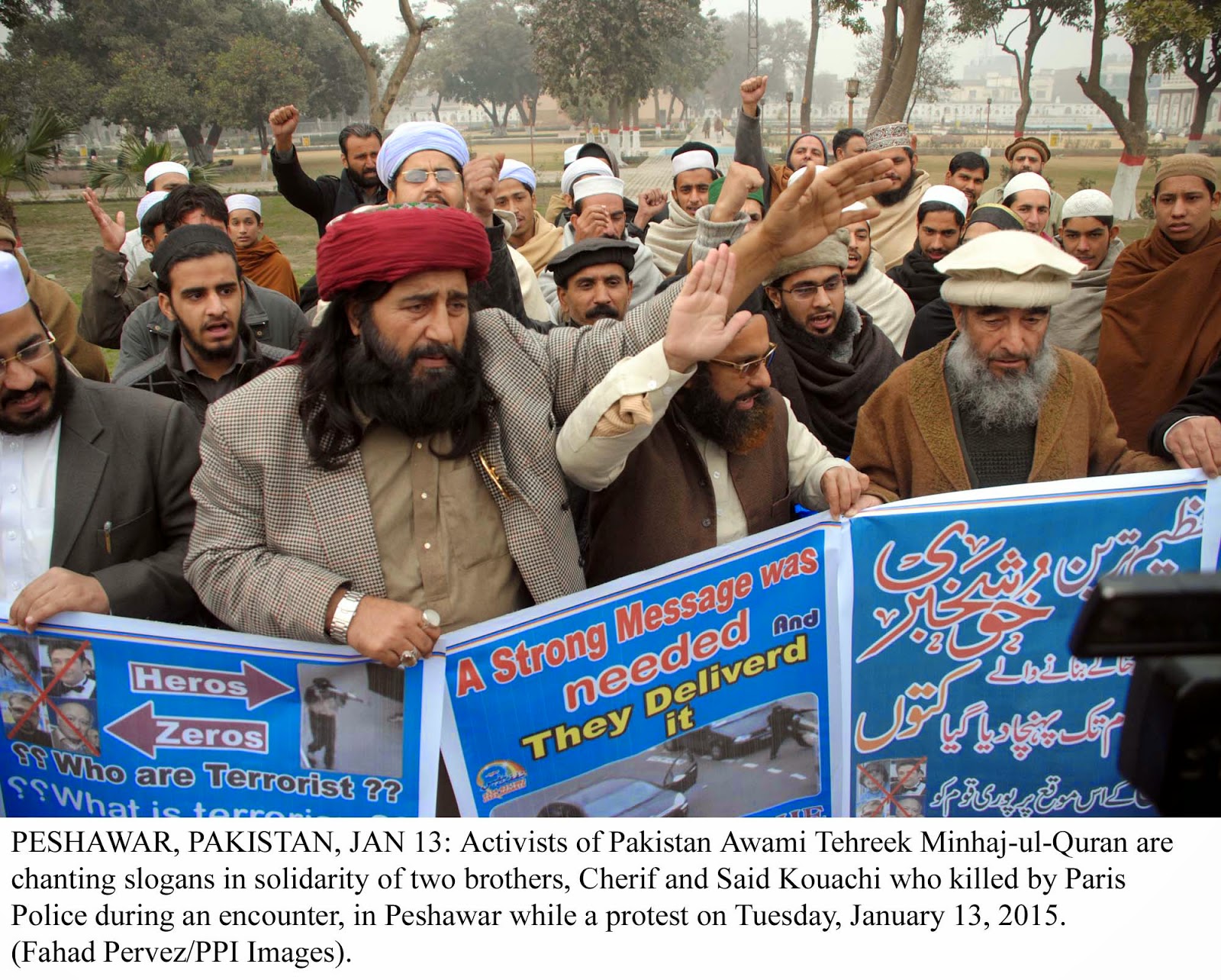 Posted by Andaleeb at 7:18 AM No comments: