Stop time if you can
Live in eternity
For no clock will ever give you that,
It’s too long to wait
Dismal too,
Through agony,
Continue
In sleepless bliss of night
Turning into light,
Catching sunrays on windowpanes
Burning bright
As pigeons knock
Make you rise
To grim realities
Soaked dreams
Placid crumbs of self,
That delights in sacred flight!
Posted by Andaleeb at 3:50 PM No comments:

Yesterday was World Suicide Prevention Day. And I feel weird to know that an online friend of mine felt so dejected and hopeless that he took his own life. He was depressed and could not see any point in continuing. He posted many times about his abusive father, and this week, after being physically assaulted, called police on him. However, that was not fruitful either. I do not know what transpired between the police and him. All I know is that he wasn't helped when he needed.

I never met him in real, only interacted online. According to him, his therapist had not called him for weeks. So, he mostly relied on friends. For, expecting support from his family was useless. It is not only sad, but cruel on so many levels.

May he rest in peace now. Away from the cycle of abuse, helplessness and dejection. Away from doctors like Shazia Nawaz, who cannot stop abusing someone with mental health problems. I wonder what kind of a doctor would say this on the Facebook wall of a person, who died only a few hours ago? 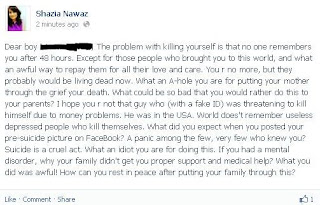 There are many reasons people with suicide ideation do not get timely help. Including doctors like Shazia Nawaz and others who say shit like 'attention seeker', 'weak', 'drama queen', etc. Criminalization of suicide is not much help either.

I feel awful and weird. He posted his picture with a rope, before he hung himself. Perhaps the final cry of a helpless being, stuck in limbo.


Note: The name has not been mentioned, so people like Shazia do not abuse him further.

The world is filled with men suffering from rabid misogyny. Their view about women works in a binary. "The woman I approached and spoke to me easily is a slut, and the one who shunned me is a bitch." Either way, they love indulging in slut shaming. The height of misogyny being mainstream can be gauged from the fact that even men, who want to be identified as feminists end up showing symptoms of advanced "Rabid Misogyny Syndrome".

They repeatedly call a woman, who 'dares' to counter their bullshit a bitch. Oh, and if the bitch dares to point that they are being stereotypical, she deserves some more 'bitching'. So, one might think, wow that is so original and this guy is a lovely feminist I would never want to trust in handling "women's issues". Unless, of course one was a doormat or suffering from "mother hen syndrome". Thinking that talking 'nice' to an angry young man would not only help appease my 'motherly instincts', but also keep me as their leader.

Here's an example from the perpetual Rabid Misogynists (profile 1, 2 and 3) from a group called Rationalist Society of Pakistan (ironic, I know) who my friend Mariam loves to call a rabid dog. 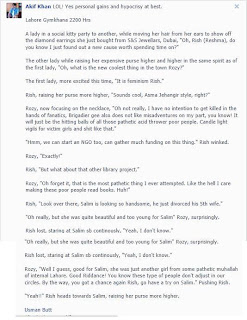 In case you did not have enough of the intellectualism of this brilliant man, try reading the remaining thread filled with more rationalism, interspersed with 'bitch' as the best epithet another 'enlightened man' could come up with. 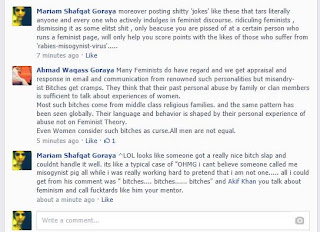 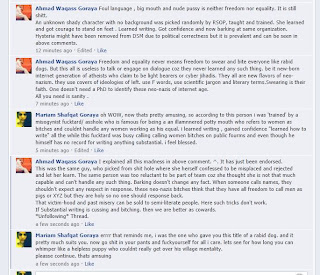 Oh, and not to forget he runs a page and magazine too called Rationalist Society of Pakistan. I wonder why all these narcissist men, wanting to be leaders of some sort want to identify themselves as some liberal, feminists, leftist brilliants who the 'women of Pakistan' had the good fortune to interact with. Worse are the admins and people associated with this RSOP group, who do not take a stand against such behavior. No disciplinary action is taken against these men, and the best thing they do is, send private apologies. Here's the last apology sent by RSOP founder Haider Shah on June 18, 2013, after a shitstorm created by the same misogynist man Waqas Goraya. 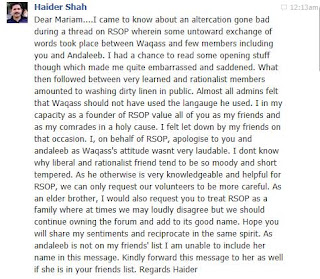 PS A later update, where the intelligent man decided to gift, all the women who countered his bullshit, some pads. Apparently, women who had the guts to counter this pseudo-intelligent excuse of a man, are PMSing. More misogynist bull crap by Rationalist Society of Pakistan admin. 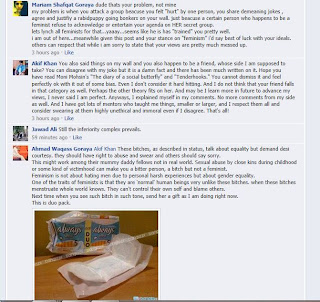 The mushrooming of these countless rationalist, humanist, secularist societies on the Pakistani interwebs is nothing more than a gimmick to gain international attention. They use feminism as a mere 'selling point'.


NOTE: To read the screenshots, please click on the image.
Posted by Andaleeb at 10:57 AM No comments:

In a deeply religious society, where students want to find answers for everything in religion, threats include being labeled a blasphemer. One of my students today asked for evidence of god. Especially after understanding the beginning of religion and links to agriculture, destructive forces of nature and the ultimate belief in a monotheistic god.

As a teacher in University of Karachi, its difficult to state openly, that belief, has no links to logic, evidence and reason. I received a threat last semester to not speak about religion at all or I will be responsible for consequences. The problem is, should I ignore valid questions by students? Should I discourage students from questioning, and tell them to merely accept everything? Would that not be dishonest? I think it would not only be dishonest of me to do so, but also stunt the mental growth of young minds eagerly searching for answers.

It would be very easy to merely give a lecture and ask students to learn it by heart. Something that our education system is well known for. Perhaps, if religion, any religion was based in facts and evidence, the religious people would not feel so threatened by a questioning mind. For a student, who grew up on anti-polytheist propaganda, polytheism comes with a backup of reasoning for belief, including the importance of the Sun and water in an agricultural society, and the moon in desert-nomadic societies. In this case, the burden of proof becomes far greater on monotheistic religions. Unfortunately, the monotheistic god is beyond the five sensory perceptions and seems to have no refuge, but one in the human psychology, incapable of understanding that existence is for no reason and with no purpose.

Whereas, worshiping the sun makes sense for a person growing crops in Mesopotamia, because without the sunlight, crops will not grow. Revering the moon in the desert is understandable, as it helps illuminate the sand dunes, and the trader does not get lost. Fearing the mighty River is logical because it can destroy villages and crops in seconds. But what does an unseen, unheard, untasted, unsmelt and untouched god do?

These things cannot be said out loud really, but can only be hinted at by stating and repeating that keeping evidence and belief separate is the best available option; belief is blind; that we never found 40-yard tall human skeletons; or that early humans had low life expectancy because of predators, health concerns, etc, etc.  Noah's age is not the only problem here. The floods were raging with safety issues, for Noah, allegedly 900 years old as per Islamic mythology has a lot in common with Utnapishtim from the Epic of Gilgamesh and Manu of the Puranas. That mythology is a word kept by Muslims for other religions, as theirs is 'undoubtedly the divine' one.

It is a dangerous world out there, I told my students, as the class broke into a cacophony of questions.

PS Architecturally speaking, we have far more temples, palaces and forts to study compared to the common man's house. Just like in earthquakes and floods, the rich man's haveli and the mullah's mosque survive. Not because of divine intervention but because of better materials.
Posted by Andaleeb at 8:38 AM No comments: