People often question why the Muttahidda Qaumi Movement (MQM) has so much support in Karachi and not other parties. (And I'm not a supporter of any party - a disclaimer was necessary here) MQM was not always there, rather it was the mullah party and the feudal party who had Karachi in their clutches after the capital was shifted to Islamabad. The city was divided between the Pakistan People's Party (PPP) and the Jamaat-e-Islami (JI) with some smaller parties until 1987 when MQM swept Karachi and Hyderabad in the local body elections. However, it did not happen overnight or because the Urdu speaking suddenly wanted to support MQM for its linguistic and ethnic origins.

There is a documentary about the Medici made by PBS. It describes how from being mere bankers the Medici gained support from the people. By doing favors. Or I guess it can even be called the Godfather way. They did favors for people regardless of their social standing and in return gained their loyalty.

This is what the MQM does in Karachi. They do things like getting the electricity bill fixed for Muhammad Liaquat, which was screwed by the KESC; or one of the sector boys takes care of the weekly grocery shopping of a few women in the 'mohalla'; and some goon beats up the guy who teased Farrukh's sister on the street. These things enabled the MQM to get more and more support from the public. Another reason they get more support is that they do not have feudal lords in the upper echelons of the party. Rather they have doctors, engineers etc.

To increase their support, finances and vote bank, the ANP desperately needs more land in Karachi. Why the ANP needs land? That is the only way they will be able to generate more funds and more votes for themselves to stay around, following the MQM lead on getting to the public directly. I remember my Pakhtun taxi driver who always said that although he is not in ANP directly, if anybody in his 'abadi' has a problem, they go to the local sector to get it fixed. Hence the land mafia of any particular party is a goodwill and recruiting office. Less land for any party means, less funds and less voters. The tragedy for ANP is, it came to Karachi at a point when most land is already occupied or built.

PPP on the other hand screwed up its vote bank, which was mostly in Lyari and the suburbs of Karachi. They failed the people by not doing enough and are now fighting tooth and nail to get it back. In all this mayhem, the only people silently going about their business, and getting more support, are the bloody mullahs. One gets to see an increasing number of zombies in black abayas and more and more men with pants above their ankles in Karachi.

If only the sparring parties would take this as a hint and stop indulging in the urban warfare, Karachi may still have hope.
Posted by Andaleeb at 7:41 AM 2 comments:

This is a long overdue blog. The post for my first ever long drive and that too cross country had been pending for some time, well to be exact more than a month. It was something I had hoped of doing several times, but never knew when. So when I had this chance to move to California for a job, I took it. It taught me about my own capabilities, driving skills and things that I never knew I could pull through. That too when my morale had already been down with so many scary stories about cars getting totaled, skidding off-shoulders, getting rear-ended or simply stalling on a lonely stretch of road, I was pretty apprehensive by the time I actually drove. However, having a good reliable and in my case new car, helped a lot.

The car was good on gas and did not give any problems what so ever at any point. It would do almost a 100 miles/quarter tank if I was able to maintain a good speed. The only problem with me though was, despite a GPS I at times took wrong exits and turns. Which sometimes brought me a surprise, like that exit in Iowa combined with a wrong turn which took me into a cornfield. But I still made the most of it and found a nice place to stay the first night of my road spree. A place called Comfort Inn, clean, safe, filled with friendly people and equipped with a wifi service. It was peaceful there, and I wished I could stay there longer. But comes morning and I was on the road again.

However, this part of the drive was more tricky as the velocity of wind was extremely high and I had to hold the steering wheel with both hands. Refueling in Colorado had been a huge problem too, cause the gas station was on top of a hill and it kept pushing me around (no exaggeration here), each step I took I would be pushed an inch or two backwards. The place was pretty friendly and people were curious and asked a lot of questions when they saw my number plate and me walking alone with nobody with me despite being brown (:P).


The second day turned out to be pretty hectic, specially as I reached the Colorado Springs area. Having almost no experience to drive the car on a mountainous terrain it was difficult and exhausting as I had already been driving almost 10 hours. So when I could not take it any more I found the closest hotel to stay the night. It was called The Peck House and was located in the small town of Empire in Clear Creek County. The house was built in 1862 and was filled with antique furniture. The architecture was very interesting as well. The architect in me loved staying at the place and the nature enthusiast bubbled over with joy looking at the views in the surroundings.

The town was named for the great state of New York, this small town expected to be as great an empire someday. Gold and Silver mines abounded between 1858 & 1865, and many fled the turmoil of the East to stake a claim. Among them was James Peck and his 3 teenage sons.

The view of the mountains and valley from the front porch of the house. The Porch was lined with humming bird feeders which came one after another as the sun gradually hid behind the mountains. The place reminded me of Kashmir very forcefully. There was a similar view of the valley where I lived in Bagh after the 2006 earthquake. My first thought when I arrived was that I have found Bagh in the US.They came in 1860 to build their house so the other family members might follow. In 1862, Mary Grace Parsons Peck brought the family goods by oxcart and joined her family. Soon investors for their mines arrived from the East and Mrs. Peck became a full time innkeeper and cook.

The stay at The Peck House was great with great food and a wonderful hostess. It was after reaching my apartment and while doing my research on the house that I found out it is said to be haunted, which added to the allure of the place.

This was a rustic garage or a barn on the side of the hotel building mounted with the antlers of a reindeer.

Close by was a stream and a rickety wooden bridge with a sign that said ‘trespassing private property’. So all thought of crossing over washed away.

I resumed my journey the next morning despite wanting to extend my stay; however I regretted that within half an hour as I got my first ever speeding ticket while going downhill near a small town.


It kept me depressed for may be an hour or two at the most, but the view was so inspiring that all the depression went out the window pretty soon.

The drive through Colorado, through Utah, Nevada, Arizona all the way to California was great filled with many beautiful and picturesque valleys, mountains and canyons. The third day I stayed at the Oak Tree Inn, in a small motel Yermo, San Bernardino County, California. It was a wonderful place too. And since I had to wait another day for my apartment to be ready, I went to see the Calico Ghost Town (Will blog about it some other time). After staying two nights in Yermo, I finally arrived in Corona at noon and moved in to my new apartment in 2 hours. Happy Ending!!! :P 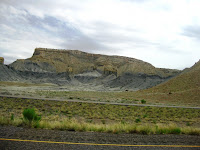 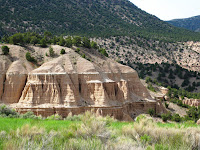 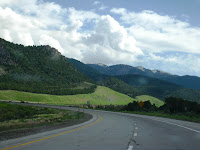 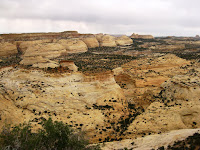