In the name of politics: Dashing the Hague Convention

The commoners’ idea that politics is a dirty business would not be too far-fetched when talking about Pakistan; instead, it is as extreme as those wearing sharia beards. An Urdu saying, ‘pait mein daarhi’ (literally: having or growing a beard in the stomach; figuratively: having a hidden beard), was written for those running so-called liberal parties. It’s a fight out here, and Pakistan People’s Party (PPP) has used the covert way to subvert Taliban, by targeting heritage at Sindh Cultural Festival. The planned fest is an unconventional example of how during armed conflicts, heritage sites might end up needing protection from overambitious politicians.

In a recent interview with Daily Times, Sharmila Farooqi credited PPP Patron-in-Chief Bilawal Bhutto Zardari (BBZ) for his idea to host Sindh Cultural Festival. Contrary to PPP’s inability to hold local government elections in a short time, arranging Sindh Festival was not much of a big deal. Using government funds, of course, not only was the PPP able to publish all sorts of advertisements accompanied by their cute little Superman logo in newspapers, they even pulled off an electronic advertisement targeting the mango people subconsciously via a well-tailored Baby Zardari as future prime minister.

Not stopping there, the PPP launched on to the big idea of bringing on centre stage the Mound of the Dead or Mohenjo Daro. However, the controversial woman leader had said that though the festival would be inaugurated at Mohenjo Daro, the ceremony had been planned at a safe distance, keeping in mind international bylaws.

Mohenjo Daro is an archaeological site in Sindh which was built around 2600 BC to house one of the largest settlements of Indus Valley Civilisation. Being among the four river valley civilisations, it is a record of not just Pakistan and India’s history and ancient heritage but the entire world. One might even argue in favour of political parties using such locations as a trump card to gain say in the pluralistic Sindh, but only if such a stage was not being set right atop the historically neglected but important UNESCO site.

What currently has been planned “on” Mohenjo Daro is nothing short of a way to eradicate the material evidence of the rich and diverse culture of this land. When we think of war and its awful consequences, the deaths of soldiers and civilians as well as alleged terrorists are a reminder of destroyed futures. But in case of attacking historical sites, it becomes about wiping out history, its memory and our collective past. Exactly what the Taliban are accused of! In these circumstances, how can one support such callous neglect and destruction of our past, present and future?

In their book ‘The Destruction of Cultural Heritage in Iraq’, Peter G Stone and Joanne Farchakh Bajjaly ask why, after millennia of human conflict, have we not become better at protecting cultural heritage and if we can get better? They attribute it to three aspects: targeted destruction to gain political advantage; ‘collateral damage’ where it is destroyed as an ‘innocent bystander’ as fighting takes place; and destruction caused by the trade in illicit antiquities. Perhaps the part about “political gain” is well suited to the current scenario, albeit there’s a difference in weapons.

Mohenjo Daro at the moment is not under threat from an armed conflict, but from the political aspirations of one of the mainstream parties, the PPP. However, the rhetoric being used by the party that ruled the country for five years during the previous democratic regime reads “heritage is under threat, and the festival will protect it from destruction”. In BBZ’s words that we have to experience as part of our daily commercial dose: “Sindh Festival will make us aware of our existence.” And what better way but to replace weapons with stakes nailing the wooden stage and tapping heels in stupor atop 5,000 years worth of history.

One might remind BBZ that even the internationally acclaimed English rock band ‘Pink Floyd’ performed to an empty, ancient, Amphitheatre of Pompeii in Italy, respecting heritage by keeping the maddening frenzy of concert attendees at bay.
Posted by Andaleeb at 12:28 AM No comments:

Here I go again, talking about the interpreter class that forms the academic elite in this country. The ‘intellectuals’ for whom nearly all that is local, traditional or let’s say ‘desi’ is worth rubbishing merely because it does not fit in those defined Western boundaries of ‘civilized’, unless, mind it, the matter is about the exoticized version tailored for the sahib. Just like those perfect ‘gourmet samosas’ and ‘connoisseur jalebis’, all enjoyed wearing ‘dholki haute couture’. Tea party culture hidden behind Marxist theory and dialectics of how to buy vodka from the local bootlegger. Disjointed nuanced semantics of urban and rural divide that are not as feudal as they used to be just because the lord put some money in a couple of sugar mills and sent his children to study at Eton, Berkeley or Oxford.

Not to forget the sugar coated, tech-savvy babus who went to local IBAs and LUMs to get their humble degree; either because they were too mummy daddy to bear the routine of doing their own laundry, or because no international elite school found their credentials worth getting besmirched by the humble presence on campus. Do not count the odd ones out, for they are so few, you can count them on just one hand. [Also, to trample their self esteem, they are lathered in shariat terms like Qarz-e-Hasna]

It wouldn’t be a long shot if one said that it was summarised in the 19th century by Macaulay for the rest of the hullabaloos who were busy being ‘clerks’ [and continue to do so] since British Raj gave them the ‘authority’.

"We must at present do our best to form a class who may be interpreters between us and the millions whom we govern; a class of persons, Indian in blood and colour, but English in taste, in opinions, in morals, and in intellect. To that class we may leave it to refine the vernacular dialects of the country, to enrich those dialects with terms of science borrowed from the Western nomenclature, and to render them by degrees fit vehicles for conveying knowledge to the great mass of the population," Macaulay declared.

Apparently the enrichment never seized and continues to befuddle those who must be guided by the intellectuals as a shepherd guides ‘sheep’.

The intellectuals are stuck in the rut about generals, because supporting paternal elites in their opinion is better than supporting the status quo. Oh the fuzzy frenzy of semantics, prey the clerks cannot fathom the difference, if there is one, as they were never trained to distinguish the nuances of mere words.

But lest the clerks demand to send a general to a foreign hospital instead of the gallows, rest assured that the Berbers in them were never thoroughly put to rest. Though it is all right for my lord to inaugurate a humble school for the clerk, where never would he ever send his own son or daughter. The general must pay. Both for the hospital, as well as the school made for the clerk’s descendants. For who else would my lord not elite rule if there were no more clerks? Not those peasants, for the fiefdoms have them as serfs, and missing out the peasant lot comes natural to clerks and intellectuals alike, for those poor dudgeons exist merely as ballot papers.
Posted by Andaleeb at 4:22 PM 1 comment:

Disenfranchising the power of temptation

I never understood this idea of 'temptation', it's so full of crap and one sided. It simply translates to a woman being a living temptation in the society. A society which wants to regulate everything when it concerns women, from the way we dress, to the way we talk, live, walk, sit, etc, etc. It begins with 'good girls' do not speak too much, give their opinions too much, wear short clothes, make their own decisions or worse of all demand to be treated equal to men and have sex.

In case you do not agree with this conditioning, you will be told that living as you please is a temptation for men. If you speak too much, a man might be tempted to shut you up by force. If you are too opinionated and wear short clothes, men might be tempted to think of you as an open minded whore, and end up raping you. And if you demand justice, remember it was you who tempted, and your value is half that of a male witness [Not just in Islam. Conviction rate of rapists in USA is a mere 6%], so the man will get away with a pat on the shoulder, because after all, it was your fault. 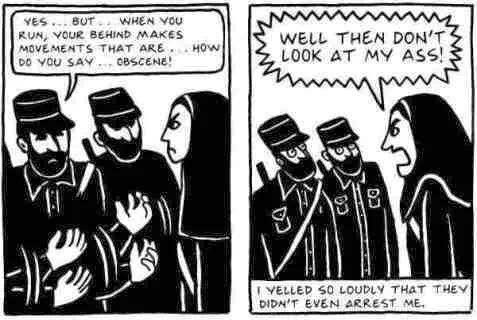 In short, your choices are, being a good girl and getting married, or, being the bad girl who is treated like a whore. If you are a 'good girl', people have authority over you to treat you like cattle, cover you up in layers of clothes and present you in a marriage market, where the highest bidder will get rights to plunder your body as he pleases. By the way, in more than 35 countries, marital rape is not considered a criminal offence. There are verses in the Quran that tell a man he can sow his seed in a woman as he pleases. [2:223 security reasons]

Point here being, "As the Man pleases". It begins and ends with pleasing men and is never about a woman's own choice. While we all live in a world full of temptations, and temptations could be of many kinds, when it comes to religion, it seems that the only temptation are us women. Even the way we breath can be termed a temptation by men. Christians have a little bit better in their Bible in the form of conjugal sexual rights. As long as your rapist is your spouse, its legal honey, bear with it:

Religion talks about us women along with cattle, land and possessions [3:14]:

It seems that while the 'good girl' has the chances of getting raped by her spouse, the 'bad girl' is not safe either. The only difference is that the 'good girls' chances of getting raped are limited to one guy only, while the 'bad girls' can get it from anybody around them. Co-workers, random dudes roaming the street, boyfriends, even fathers. Actually, in my opinion this whole good and bad girl conundrum is just humbug. It is about men; when they want to be appeased, sated sexually is when they can decide about whether you are a good girl, or a bad one. Either way, we are temptress since Eve's time, who dared to pick the forbidden apple, and man has yet not forgiven us.

Here's what a sermon website has to say about temptation:

Posted by Andaleeb at 2:23 PM No comments: