She was young beautiful and loved by all, she had been there for thousands of years. From the time when man started thinking, perhaps stood up on two legs and started cherishing her. She was the mother, the nurturer, provider, caretaker everything for them. She deserved to be loved. She prospered and evolved into a shining beauty, coveted by all and worshiped for her qualities.

Then came the marauders. The unrelenting, greedy and blood thirsty invaders who wanted nothing but to rape her. And who could defend her but the ones whom she cherished. They fought for her, died for her but could not save her from the barbarians. Hence, the Barbarians settled there for good or for bad only time will tell. But they settled, started calling her their mother too, but who could love her more than the ones she had nurtured and nourished for thousands of years. Only their heart bled at the pain and agony she suffered. The barbarians pretended to be the caretakers, but they still raped her continuously and why not? She was not their mother, she was only a shining beauty to be taken, dressed in gold and jewels but not because she is the mother, but because she is to be shown as the submitter the conquered.

The barbarians in a few hundred years, are not considered barbarians any more but the owners and caretakers. In their hearts the true sons know that it will not be long when the harbingers of mischief break their mother, tear her into pieces and leave no option but bloodshed. Indeed, they were right in their assumption. It was not merely an assumption but was proved as a fact later. She was no longer their mighty mother, she was broken into pieces. Forsaken by the greed of those invaders who never really worshiped her as their own. Nevertheless, she continued to nourish and nurture even the ones who betrayed her. But that was not all, they broke her again and again and again, until she no longer had the strength to bear them any more. Now she lies, heartbroken, in tears bathed in blood, silently watching her children ruin each other. Perhaps she has lost hope, perhaps she has given up. She no longer awaits for them to worship her, what they give she takes with averted eyes, never questioning, never asking, never showing her wrath. Nevertheless there is anger, it becomes evident when she trembles each time. It says a lot to her true sons who have worshiped each and every part of her. They know their mother is suffering and who can tell when this suffering will end. Indeed if it can ever be stopped.

Posted by Andaleeb at 4:29 AM No comments: 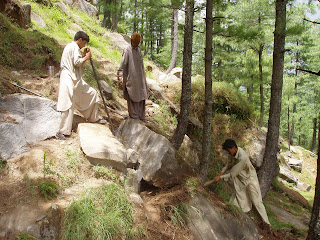 (A page adapted from the daily report)

It was a depressing day today, the owner of Site two had died last night, I had heard the siren of an ambulance. That is why we did not work in Kafful Garh today, except check the block making machine. It had to arrive from Bagh on our truck, and we had to take the sizes of blocks and check if all parts of the machine were sent or not. Unfortunately the loader had forgotten to load the motor and now we will have to wait one more day before starting the production.
We went to Hans Chowki as decided to meet Shahid and inspect the progress of our house three. There seemed to be some difficulty for the masons to level the DPC probably because they did not use a steel trowel to level the wet concrete. The owner of the house wanted to discuss a lot of things regarding the roof. He wanted us to make a pitch roof instead of the flat roof that we had earlier discussed. But I guess this is all a part of work, you discuss one thing and then the owner wants something totally different, and we have to adapt accordingly because after all he is the one who will be living in this house. But it was a little disappointing for all of us. Because then we will have to rework a lot of things.
At 2:30 we visited the site where someone was willing to sell his stones to us. It is one of the prettiest places to be. Surrounded by large trees and the ground covered with lush green grass, and it is fun to chase all the chameleons around. The quantity looked insufficient and we will have to think of other alternatives as well.

At three we left the site and started our 2 hour ride towards Kafful Garh for the night. On the way we visited some new under construction buildings for a school and a house, and also invited those people to visit our project. We had to stop at the Bagh base to collect a few things and do some shopping in the bazaar. It was late when we finally did reach here and all of us were very hungry, as we did not have anything for lunch. It looked like we will have to stay hungry because the cook had disappeared and there were no leftovers in the kitchen. But Maggie Noodles saved the day.
We had a long long meeting after that deciding about the sections of the buttresses and walls of site one, using or not using the metal wire or the wire-mesh and chicken mesh.
The septic tank issue, the false ceiling and the repairing of toilets even if they are not a part of our project were finalized. Everything is becoming complicated with time. We have to find a good plan for the transportation of plastic sheets from Lahore and it has to be done as soon as possible.
Posted by Andaleeb at 4:06 AM No comments:

Contribution as an Architect….

There are some things that are the reality and some things that are perceived as a reality. In our educational system (read Architectural studies), we are brought up on Le Corbusier, and Frank Loyld Wright, and Mies, and Alvar Aalto and....I guess everyone knows how long the list is, but hardly are we told about the actual person walking on the (scarce) side-walk who builds a house for himself. Therefore with our limited education....shaping as well our long term perception we only cater to the elite, or the rich...people who in reality are the only ones able to afford a well trained architect...and leaving the rest to either serve them selves or get some untrained person to do it for them. Though trained, untrained and well-trained architects could be another debate...
We are following the west blindly and devotedly I must say, and in turn rust our own basic knowledge and potential. We treat Form Space & Order as our bible, not paying attention to 'Hasan Fathy's Housing for the poor', though looking at our climate and the indigenous materials we should be considering the latter as that.....(sorry for borrowing the western expression of bible...but m scared of calling it Quran in fear of sounding sacreligious to some...)
All in all.....I am quite skeptical of the architectural community and their contribution towards the profession and environment on the whole....
Posted by Andaleeb at 3:46 AM No comments:

Here she stood today in defiance of her teacher to find out more about this concrete jungle. Yesterday’s vista was still quite clear in her mind and although it did not frighten her she did feel a little intimidated by the surroundings. Already there were a few cats moving about looking at her suspiciously as if they expected her to harm them in some way. They walked with a funny sideways leaning gait. A lot of times rubbing themselves off on weird objects, it took her a while to realize that they were doing exactly the same as she used to do with trees when marking her territory. This is interesting she thought.

As she moved on she saw others of her kind but these she knew instinctively were ferocious she could sense her muscles going rigid and alert as her nostrils filled with their smell. Nobody had to come and tell her that she had to be wary of this clan she already knew by her inborn instincts. She felt relieved to regain her confidence in her instinctual behavior; she had always relied on this natural talent when she was in her own habitat, it kept her safe and also got her food every day. This new jungle was at times confusing for her, she did not rely on her own instincts to feed herself and that is why at times had to go to sleep hungry. But those were rare days like when it rained a lot or she heard something had happened outside the park and there was no movement at all. Nevertheless it was a reassuring factor for her to realize she had not totally lost her gift.

Suddenly she could smell raw mouth watering meat, she couldn’t tell the kind but she knew it would be great to taste so she started sniffing for the direction it was coming from. As soon as she spotted it right across the street, she saw a kitten that in her opinion had recently left her mothers care, crossing towards her being hit by a big fast moving object. It moved on two round items, it seemed that those were cut out portions of a tree trunk but they definitely looked a little bit different. The kitten must have died she thought so she moved ahead towards the smell and finally found it a bit further down the lane. It felt like ambrosia after those left over tidbits she had been eating for the past few months. She had her fill of the fresh meat and moved on to check out the other myriad of smells her nostrils could pick on every second. She saw colorful flowers, a place packed with different skins, another one filled with so many big and small objects, overflowing with colors she never saw before.

She stood looking at all these wonders, thinking why the teacher had asked her not to venture out in this new jungle. To her innocent unused eyes this looked like a wonderful new home, adorned with colors she had not known existed and objects that looked from another world. Venturing on she stumbled across many leafless trees and moving and rolling boulders of different colors. She took note of these things, so she can ask the teacher what they really were.

As it closed towards evening she thought of returning to the park, but realized that she has somehow lost the track. As panic struck she started running in the direction she thought she had come from and suddenly stood right in front of a big black dog. Instinctively she knew the best would be to climb the nearest tree and hide in the branches. No sooner did she do so, she became aware that all along the path the trunks she had thought as trees were not really the trees she was used to; apart from not having branches they also had a surface her claws could not hold on to; in desperation she climbed to the top and felt safe. She knew the dog cannot reach her, but similarly she didn’t know how she will get down.

Posted by Andaleeb at 3:03 AM No comments: