Pakistan is a class based society, be it under a democratic regime, dictatorship or a somewhat-theocratic regime. We have ministers, who come from feudal or industrial backgrounds most of the time. And our system is made in such a way, where power remains concentrated in the hands of the people, who have been born within certain families, that help them maintain their imperial status intellectually, as well as economically. It creates a system where the privileged feel threatened even by the slight questioning of their ‘rights’ that they have been accustomed to.

One might encounter several such people on the Pakistan social media sites. Men and women flaunting their political, economic and social status on every occasion they get. Among these, there are certain quasi-empathetic ones. They criticise the elite themselves, but raise up their cudgels and contacts as soon as some middle class person states the obvious, trying to maintain a monopoly even in the virtual world.

Here is a perfect example of one such incident. Where Ayesha Sultana was cyber lynched along with several of her friends and supporters, who dared to talk back to the Pakistani ‘elite’.


The story starts two months ago, when Ayesha, a Pakistani middle class woman living in Canada, received an SOS email from H*, a woman based in Lahore on January 14, 2013. The following is an extract:

After receiving the SOS message, the email was forwarded to several ‘vocal’ feminists on social media, especially in Lahore. From asking Ayesha to ignore the email as spam to sending her information about some shelter, the ‘online feminist’ crowd turned out to be disappointing. One of the ‘famous twitteratti’ her words, not mine, was contacted as well. The lady has claimed to have helped several people in her life most of them tend to be ‘former’ acquaintances of hers.

Moving back to the incident that triggered the hashtag CyberBullyAyesha, by the atheist, feminist high school mentality elite crowd, suffering severely from munchausen syndrome (no pun intended). After getting disappointing answers from one of Women’s Action Forum member and the bunch that claims to be radical feminist, custodians of the Pakistan Feminist Watch lynch mob and the high and mighty cyber witch hunters. The said activist sent several messages to people who actually do not brag about what they do for women in real or virtual life.

However, angry and hurt Ayesha chose to use her right to freedom of speech, thankfully provided by Social Media platforms like Facebook and Twitter, to rant against the over-all lack of empathy when it comes to women’s issues. This is what she wrote:

3 days ago, I got an email from this girl in Lahore about abuse that she faced from her teachers at Punjab University. She was scared, she wanted to file the complaint but she didnt know how it would affect her. She was scared of her family as to how they would react. She was completely distressed and distoreted while we communicated further.
I promised her that I will try to find someone in Lahore who can actually help her as I am not aware of the vicinity.
On my search for resources, this is what I observed; The so-called feminists and elites women of Pakistan who have TIME to be indulged in intellectual masturbation all day on theories of feminism & "Oppression Olympics" were TOO BUSY to lend in their contacts for help. They were of the view that we should just throw someone to a "shelter" or be "ignored" not recognizing that shelters are NOT really the greatest option and we can provide better resources of advocacy.
I just fucking sick and tired of these "elite" & "feminist" women for whom "feminism" is an elite badge which they borrowed from middle class white women of the West & who have never done fucking ground work in their sorry ass privileged life except talk about with their "Che Guevara" caps wearing males, how life sucks!!!
#RantOfTheDay

The general statement did come out as a shocker for our ‘Feminist Queen Bees’. Ayesha, without taking any names had hit the heart of the problem, unleashing on herself the wrath of the privileged section of our society, who have far more access to internet and a lot more time due to their, ummm ‘non-worker’ status? The following are the screenshots of the insults and exchanges: 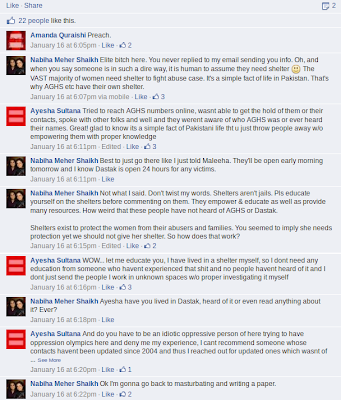 If the fiasco has stopped right there and then, things might have been hunky dory. But unfortunately (for the Pakistani privileged lot), Ayesha was not alone. She was supported by several local as well as international activists who chose to counter the personal attacks being carried out by the ‘disgruntled Queen Bees’ of the Pakistani twitter world; for whom telling Ayesha to go for psyche evaluation came as naturally as crying comes to a newborn baby. They continued to target not only Ayesha, Maleeha and I (not just for supporting her and being anti-class-system, but also for having some mental health problems) but several international activists, including Leila Zahra, Nasreen Amina and Ram Narayan. 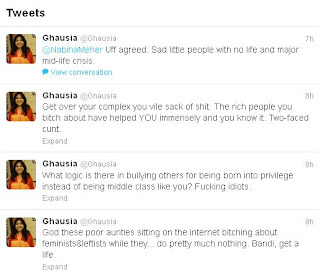 Apparently saying cunt, bitch, and invalidating someone for having a mental disability makes the said lady a very good feminist. If the same had been done by someone, who was not friends with the 'elite' crowd, s/he would have been lynched. Here's an example from someone who refused to take any step against the lady above, for it was a personal matter. 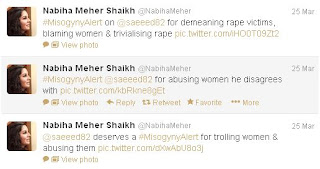 Tweets referring to people as Ayesha’s minions can be viewed here: 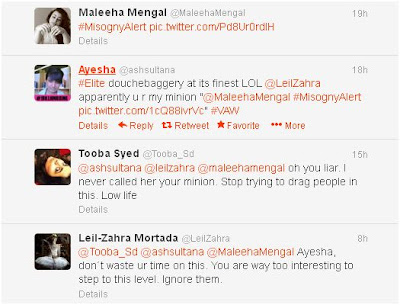 Maleeha Mengal has been told off by one of the Queen Bee crowd as being a ‘nobody’. In support of Ayesh she said, “We are all here to understand without interacting face to face. Words matter, if you create a hybrid of follies, you will end up making a mock out of yourself. We were there for Ayesha because, we saw, how everyone started calling her a bully when she only questioned their statuses. If they are so keen on their class, so are we, we are not privileged to automatic drifts, we get everything manually, and we go ahead of them. So why hide? Everyone can talk here online, not just the famous or elites. This is the only place where they cannot control the crowd; and we can all follow what we believe in.”

Ram Narayan from India, who works on rights of women prisoners, asked a very valid question, "Why are thy so insistent on putting people in shelters? Cause, THEY run a few and thrive. Seriously.. Dumping women in shelters fuels their own NGO business. And wearing the NGO tag as just that.. A tag."

The internet has created a fissure within the social fabric. In the past due to lack of access to communication devices and means, many people were unable to criticize or directly take to task the people who are the haves in our society. Even today, with 15 percent penetration of internet usage in Pakistan, a large majority does not have a voice to disagree with the decision makers, or even to ask for help against them. Hardly 12 percent of the total population actively use internet and even lesser use it for activism and grassroots movements. To be frank, there are no ‘grassroots’ online. 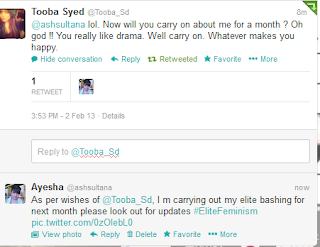 For anybody who is wondering who Ayesha Sultana is? She's an activist and blogger, who is studying forensic chemistry in Canada. She recently was nominated for the BlogHer International Activist Scholarship and will be presenting her work before a wider audience. For details: http://www.blogher.com/announcing-recipients-blogher-13-international-activist-scholarship

You can also check : http://storify.com/ashsultana/queen-bee-minions-and-elite-feminism
For reading the whole thread where Ayesha was attacked: https://www.facebook.com/goddess.chaos/posts/10151493527635817
Information about the shelter that was recommended for H*: http://aghsblog.wordpress.com/
Sharmeen Obaid Chinoy who won an Oscar filming acid burn victims, was accused of not doing what she promised Rukhsana. The case will remain obscured by conflicting accounts. For in Pakistan, media, judiciary and politicians are all for sale if one can pay the right price: http://criticalppp.com/archives/tag/sharmeen-obaid-chinoy

PS: Before anybody starts jumping the gun. All the screenshots have been made from public posts and were contributed by several people.
Posted by Andaleeb at 1:46 PM 2 comments:

I live in Karachi, not a city of lights any more, but violence. Where crime stories are referred to as routine and the number of dead-bodies becomes important, when the count is more than a dozen. The city of Karachi lost yet another soul, who was a mentor, teacher, educator for hundreds of students at Visual Studies Department, University of Karachi; NED University; Indus Valley School of Art and Architecture; and Dawood College of Engineering and Technology. She left in her legacy students who know the difference between a slum area and a squatter settlement.

Today we mourn the loss of Parveen Rehman, one of the best teachers I had a chance to interact with. She taught me how ‘not to hate the poor’; not to refer to ‘katchi-abadis’ as slums and instead ‘squatter settlements’, for she said in her sweet melodious voice, “Slums mean poverty, crime, hopelessness, while ‘squatter settlements’ are a hub of hope, cultural diversity, will to make things better. Don’t you think so too? I feel we should not say ‘slums’. It sounds so wrong.” She asked if I knew that people in squatter settlements take care of each other more. ‘They stand up to support their neighbor if there is a problem’.

If I am aware of these nuances today, it is because of Parveen. If I disagree with the popular discourse that this country has gone to the dogs, it is because of teachers like her. People like her, who chose not to runaway in the face of threats, fears of losing loved ones and being left alone to deal with problems.... Problems of sectarian violence, of Tehreek-e-Taliban, of land grabbers, tanker mafia and in all this, the political 'gamers'. The ones who love playing the blame game as they please, who say its a foreign Jewish, Indian conspiracy when Shia are killed, but are jumping the gun this time by saying the Taliban killed her.

To the politically linked land-mafia.... we haven't forgotten Nisar Baloch, who worked for saving the Gutter Baghicha. And we won't forget Parveen Rehman. We lost an educator, who shaped a generation of socially responsible architects, planners, teachers and activists. She left a legacy and you cannot take that away!

PS: Also found out today about how they killed Abdul Ghani for Kakapir Mangrove Project. And still morons want to claim it was the Taliban.
Posted by Andaleeb at 11:43 AM 2 comments:

Humans;
Shape shifters
Logs or rafters in a loft
Creepy crawlers with shells, or soft
Darkness, light, it’s your call
Dim or bright is not all
Brazen or discreet
Bright or bleak
Honest or cheat
Nobody ever knows the true creed
So drift like leaves
Or be a tree
Kill the shadow
Of the shape shifting beast
Posted by Andaleeb at 5:10 PM No comments: