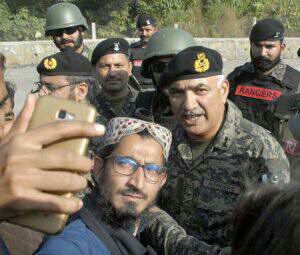 Since the deadlock between the government and Barelvi extremists of Tehreek-e-Labbaik Pakistan came to an end on Monday, November 27, one thing was loud and clear, the Pakistan Army refused to take action against “its own people”, as the chief of army staff said.

The civilian government had been trying to handle the situation since November 6, when the sit-in commenced, but was forced to request for army assistance to tackle the jihadi sentiments on the orders of the Islamabad High Court. However, the anti-Ahmadi rhetoric played by the Pakistan Muslim League-Nawaz against the sitting Chief of Army Staff General Qamar Javed Bajwa came back to bite them during the Faizabad Interchange sit-in. The army, instead of coming in to take hold of the situation 1953-style, chose to coach civilians about amicably handling Punjabis overdosing on the blasphemy law.

This incident has not only paved the way for the COAS to clear his name in the eyes of the largest sectarian group, but it also falls in place with the establishment’s plan to mainstream Islamic extremists as a political alliance.

Earlier, when Nawaz was deposed as per court orders, and by-elections were called in NA-120, one of the contestants was Qari Yaqoob Sheikh of the unregistered Milli Muslim League, technically a candidate of the Jama'at-ud-Da'wah, political wing of the Lashkar-e-Taiba. Qari Yaqoob bagged 4.59 percent or a total 5,822 votes in the by-election. The launching of the Milli Muslim League was opposed by the PML-N, but their protests went unheard.

The other religious person, who was ahead of Yaqoob was Shaikh Azhar Hussain Rizvi at 7,130 votes or 5.62 percent of the total. Azhar participated as an independent candidate against Begum Kulsoom Nawaz of the PML-N; however, he belongs to Tehreek-e-Labbaik Pakistan - an Islamic political party founded by Khadim Hussain Rizvi, the architect of the Faizabad sit-in.

Since the time Shaikh Azhar bagged third position in the strategic Punjabi constituency in the heart of Lahore, the party had been aggressively campaigning for getting a strong foothold in mainstream politics ahead of the 2018 elections. Tehreek-e-Labbaik holds Malik Mumtaz Hussain Qadri, the convicted murderer of Punjab governor Salman Taseer, as innocent and his hanging unjustifiable. It has resorted to sloganeering and urged people to take to the streets to protest against the perceived persecution of Muslims in the Muslim majority country.

Originally, the demand of those sitting at Faizabad was to reverse the law pertaining to the finality of prophethood, which was accepted. To further gain momentum and support for the new party, Khadim Hussain had expanded the scope of demands during the protest and also called on the entire cabinet to hand in their resignations.

Faizabad Interchange, made in the 90s is the gateway between Islamabad and its twin city Rawalpindi, from where thousands of people commute to the federal capital on a daily basis. The blockade of the interchange by the Tehreek-e-Labbaik Pakistan was strategic as it paralysed the twin cities for close to three weeks.

Since a vast majority of Sunni Muslims in Pakistan belong to the Barelvi school of thought, the Tehreek-e-Labbaik Pakistan founder Khadim Hussain is vouching on them to help him win a majority in Punjab. Especially under the 'namoos-e-risalat' banner. Under whose patronage is anyone's guess!
Milli Muslim League on the other hand, has slightly lesser supporters due to its Salafi leanings, often at odds with the shrine-going majority of the rural and urban population, and hence closer to the Deobandi school of thought. It is this similarity which has been helpful in raising the Taliban and now Daesh among the Deobandis of Pakistan and Afghanistan, largely funded by the Salafi Saudi regime.

The turf war between the Barelvis and the other major Sunni groups is old and both have been involved in target killings of mosque imams for taking hold of an area in different parts of the country. The recent fiasco in Islamabad seems to be an extension of the same. The stance of the security establishment in the matter and their refusal to confront the previously obscure, but majority Sunni group, is recognition of the need for perhaps a grand religio-political alliance.

The failure to make the Pak Sarzameen Party and Muttahida Qaumi Movement-Pakistan work jointly in Karachi might have served as a precedent for the deep state in this matter. Bringing politicians to heel is a problem when it comes to following without question.

This grand alliance in Punjab will not only deal with the PML-N and divide the Punjabi vote bank, but also keep in check the volatility of the Pakistan Tehreek-e-Insaf (PTI) leadership, another right-leaning set of hooligans who brought the federal capital to halt in 2014. A poor precedent was set during the more than 120-day demonstrations staged by the PTI and Pakistan Awami Tehreek (PAT) simultaneously in 2014 when Islamabad was locked down for more than three months. Prior to that, the PAT protest in Model Town, Lahore in June 2014 had ended in violence and multiple deaths. A re-enactment of the PAT demonstration is perhaps on the cards too, as Tahirul Qadri landed in Pakistan on November 28.

This time around, the Faizabad sit-in however ended 'amicably' as the COAS brokered a six-point deal between the miscreants and the government which includes the resignation of Law Minister Zahid Hamid, inquiries and investigations against those involved in changing the wordings of the oath related to the finality of prophethood, and freedom for all those arrested during the operation against the instigators.

Milli Muslim League lagged behind the Tehreek-e-Labbaik candidate, it was a major sign for those in the power corridors to realise their mistake of not recognising the bigger terror group hiding behind its tolerant Sufi-turbaned facade. How this will end, with Hafiz Muhammad Saeed walking as a free man now, only time will tell.
Posted by Andaleeb at 6:02 AM No comments:

#BeBoldForChange is what the International Women’s Day 2017 is asking us to be. Calling on us to take a stand and work towards a better future that is not only more inclusive, but more equal and prosperous.
So, while the world is working towards adding more women to the executive boards to accelerate gender diversity, and urging more and more women to join STEM (science, technology, engineering, and mathematics) fields, is seeking reproductive rights for women, sending more and more girls to school, fighting against female genital mutilation, and explaining consent and that a no means no - teaching men not to rape, our society is still concerned about how to marry off girls to men who will ensure the women never work for wages and spend their life rearing their in laws offspring as well as their own.
These women are being forced into unpaid labour by their own parents who think a woman’s place is in the kitchen and her life must revolve around some lazy men who cannot be taught to cook, clean, make their own bed, and take care of children. (Sometimes I wonder if they expect us to be grateful that South Asian men wash their own piss and poo). These women will end with no say of their own in matters of finance, health, housing, employment, and even child rearing.
For all the sacrifices these South Asian women will make, they will be given a lollipop in the form of “the door to heaven lies beneath the feet of a mother”, ensuring that even if they do not want to, they pop out a baby. They will be told to forget about all their dreams and aspirations of doing something more productive, and will be cajoled into taking the “natural course” of reproduction.
How many of these women will take a stand? How many of such parents who force their daughters into drudgery are around us? And how many of us will take a step to put a poke in the wheels and help the women who are being forced by their own parents into drudgery? How many of our friends will be sure of support from the community in case they runaway or divorce their abusive husbands?
Will we believe her if she said her own father abused her and her mother was an aide? Will we stand by the woman who left her husband because he raped her on the wedding night, and promise not to doubt her story just because she is a woman wearing makeup and not crying her heart out?
We have to #BeBoldForChange for ourselves, other women, and everyone else living on this planet. We have to take a stand for our own rights and for that of others. We need to stop being afraid of saying no, be it to our family, friends, colleagues. We are not born to please everyone. We are not here so our bodies can be used in bits to sell products or to make babies or save men’s honours.
We are here like other humans.
We are humans!
Posted by Andaleeb at 4:42 AM No comments: