If I mock the Supreme Court of Pakistan, and all the sheep who are slaves of 'definitions' such as 'free judiciary', I might be labeled a right wing loony. But I've read Riaz Basra's trial as well as Asia Bibi's. I have edited news about lawyers boycotting courts at least twice a week. I know that a worker cannot even afford to file a case against employers because the law favours those who are privileged. There are countless women awaiting hearing in Hudood cases.

And among all this, we have a judge, who decides who shall have what, who has behaved well with him and who has not. Since it has become a personal matter, an 'us' vs 'them' scenario, the community has inflicted a moral jury on one of its members because it has stamped him in some degree or dimension an outlaw. If in these circumstances, I judge the judiciary as biased and carrying out a personal agenda against Musharraf, your 'rants' would be nothing more but arsenic tirades negating your 'public support claims'.

'Public' is not a homogeneous group, so stop associating and claiming it to be some archetype which wants what you want, and which demands what you think they 'must' demand. Not all public is offended by what Musharraf did in case of Lal Masjid, or Bugti case. Also, not everybody thinks he should be given precedence above all because he is an army general, or has been. Everybody does not have to care about terms like 'democracy' and 'dictatorship'. Stop fitting such a diverse group of 'public' in a box that is within your head, which is stuck in some theory books fed to you at some elite school, or at the dinner table of your bureaucratic father's home.

When you do this, it only brings out your bias and want for power. Where you see 'public' as an empowering tool. A public that is tailored for what your vision is. A union of your desires to sit on a thrown, be it political, philanthropic or just an egotistic one, and lest you forget, in our local context, a judicial one.
Posted by Andaleeb at 11:13 AM No comments:

Battle of ‘brands’ FEMEN vs Islam

FEMEN, created in 2008 by two Ukrainians, fights fire with fire. These ‘topless activists’ march in protests against harassment, capitalism, corruption, income inequality, sex tourism, Berlusconi, sex religious institutions, international marriage agencies and other national and international issues. On an intellectual level, I find their method appealing, for it is like droning extremists out of their rat holes. However, when it comes to reality and the natural fluidity of society and the myriad individuals that make it, it becomes a problem. Just like droning the shit out of the tribal areas has not changed things much in the bigger perspective, getting naked in a society that has a thriving porn industry, worth anywhere from $2.6 billion to $3.9 billion, seems like reinforcing the idea ‘ naked women sell’.

How different is the presence of a women in a shaving cream ad, compared to FEMEN’s ‘naked brand’ protest against, let’s say, ‘Islam’. FEMEN’s topless protests around the world against sexism and other social issues seem redundant on a certain level. For the ones who would mostly agree with their methodology are the ones who are already convinced, in short, they are preaching to the choir. The ones who are not convinced will either fume with hatred and come up with things like the Muslimah Pride did, or only drool at the white, painted, erotic bodies with censored nipples (whence comes the reinforcement that women are nothing but mere pieces of flesh and bone for the consumption of ‘mostly’ men’s sexual desires).

Is liberation of women limited to displaying naked bodies? Does this make the primitive woman or an indigenous topless woman in Africa or the Amazon more liberated?

If they really value equity, why they have been seen picking and choosing what kind of body do they want for their nude protests? Does this not all add up to commodification and sexualisation of a woman's body in general?!?

Do their values evolve around invading space and hijacking voices of marginalized community or telling their members to “Go Rape Yourself”?

From within the Pakistani context, where ‘feminism’ is more of a class backed idea, the whole debate between Muslims and FEMEN, and their supporters has created a schism. Ideas range from being labelled “idiotic for not supporting FEMEN to being a Muslim apologist, and being an Islamophobe to being a white trash cock-sucker”. Trouble is the incapability to see grey in the whole debate, and resort to a black and white approach. FEMEN's assumption of being on a higher moral ground is worthy of contempt, just like a Hijabi woman’s assumption that by not wearing a hijab, a woman ends up acquiring loose morals is. Thing is, Islam, Judaism, Christianity, patriarchy, capitalism, theocracy, secularism, communism, socialism, all can be disrespected as ideologies, and so can be FEMEN as an idea.

Both groups that are at loggerheads, FEMEN and Muslim Women Pride, are focusing on their ‘brands’ far more compared to individuals. Many organisations, groups or even in some cases lone activists forget 'individuals'. If FEMEN wants to 'help' women, be them Muslim or slaves in some obscure country, there are better ways of going about it. If Muslimah Pride wants to portray themselves as not being oppressed or being responsible for ‘oppression’, being less 'defensive' and 'flaunting' of 'hijab' might be a start. 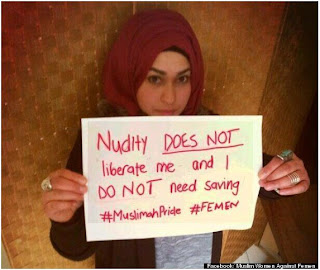 What is currently happening is FEMEN is further ‘victimizing’ the ‘oppressed’ Muslim women with their ‘naked brand' ideology. The whole 'naked protest' does not work for everything, it has become more like a marketing gimmick, 'branding' the idea of liberation for women via ‘nudity’, and in the wake of that, alienating the 'ones who you are supposedly HELPING'. 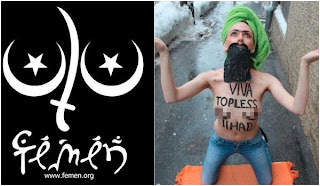 Why ‘branding’ is a problem? Because once something is ‘branded’, it becomes unalterable. It exists for the sake of existence. For some it may be to garner support for a cause, but that seems more a manifestation of having been indoctrinated with capitalism or for that matter, religion, Islam, to be specific. The Hijab too is 'branding a woman as pious', therefore the woman who does not wear it has loose morals.

On a personal note: We all need to work on things that actually make a difference in the lives of people, instead of just resorting to so much verbosity online. Or, err naked protests. What really is the point of all this? I disagree with how FEMEN protests, I also disagree with MuslimahPride, it is as simple as that. However, how much difference does all this make on the ground?

I left religion because I could not be one of the sheep, ever since; I have not been able to fit in one group for a long time. I didn't leave religion to get sucked up into the quagmire of nuanced bullshit that only looks at one side of the coin. Be it naked protests for anything and everything under the sun, or Hijabi protests appealing to some non-existent ‘better-self’.
Posted by Andaleeb at 11:25 AM No comments:

A little dose of tech can be wondrous

Our environment is so laden with misinformation and lack of knowledge that even a little bit of information gives a lot of people swollen heads and pumped up chests. There are a few well circulated articles, facts and figures, memes for people to digest, and the job of ‘activism’ is done. One can then go to their own set of hobbies and entertainment, from shopping sprees at upmarket stores to hanging out at one of the expensive coffee houses, or just simply ranting online about ‘how much I read and know about socialism, Islam, feminism etc’.

Here, I would not say that online activism has no use; it has its advantages too. Also, technology in its own right can do wonders for people who are struggling to survive in today’s war torn, conflict ridden urban environment in Pakistan and of course in other parts of the world. However, I have had my share of troubles with the online activists in Pakistan. Too many, I would say, and with very little insight into what is needed on the ground.

There are very simple and thoughtful things one can do to bring about a change. From buying someone books to spending time to teach a child, or simply giving a listening ear to a labourer in the bus, or a taxi driver while on your way to work. Everything counts. The following are some accidental discoveries I made during my interactions with the Bangladeshi ladies who used to work at my place.

Shahnoor was suffering from severe depression. She earned only Rs10,000 a month and was missing one of her son, who was with his father in Bangladesh for the past two years. Her sole objective was to save enough money every month, so she could speak to him using a phone at her local PCO or cafe. She was not concerned who won the elections, or how the evil Taliban need to be eradicated using drones and bombs. Before I go into the details too much, let me clarify why I chose to blog about this. It is just an idea that can perhaps make many people happy. Especially the ones who cannot afford to spend money to be close with their family and loved ones abroad.

I asked Shahnoor to get someone’s Skype ID where her son lived. The rest was pretty simple. She got the ID and was able to talk to her son for a few hours. It was amazing to see her expressions while she spoke and cried looking at him. How she kept telling him that he was not taking care enough, and looked so thin. However, the amazement and wonder turned to shock for me, when at the end of the conversation, she asked how much should she pay for the call. I had difficulty telling her that she owed me nothing. Soon after, Shahnoor left for Bangladesh and is now living with her family.

We take using internet for granted. Not being able to order a pizza because the cell phone was not working can be an issue for us, but not being unable to see or even talk to our son, daughter, friend because we need to spend Rs100 at the café.

For me, Shahnoor’s case has become a case study. It has given new ideas and ways to bring about the change that I rant about online. I am putting this on my blog, so that perhaps someone can do so too, or some group can pick it up, and create a group of volunteers, who on weekends go out in a neighbourhood where there are countless Shahnoor’s missing their sons.

They would simply need a laptop fitted with a WIFI USB device, a webcam, headset, microphone, and Skype. Something many ‘privileged’ urbanites already have. With a little bit of time, we can make many Shahnoor’s happy.