Military, land-grabbing, and the fate of Balochistan 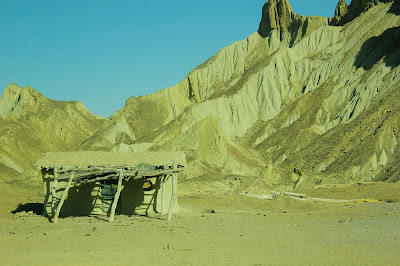 Destroyed by conflict, threatened by militancy, and crippled by lack of development and resources, Balochistan is mostly off-limits for tourists, especially non-Baloch nationals of the country. Contrary to the press reminders about the importance of the Gwadar Port, the province suffers from severe neglect. However, there is one place in Balochistan, which seems to be protected for not only visitors, but even the Hindu minority of this country, which is stuck in the turmoil of terrorism and rampant extremism. Hingol National Park, a protected piece of land covering 407,724 acres, hosts the Hinglaj Mata Mandar, and Chandragupt and Khandewari volcanoes, all sacred for the Hindus.

The diversity of the place attracts not just pilgrims for Hinglaj Yatra, but also the entertainment starved Karachiites, who are stuck with either eating out, going to the scarce and expensive cinemas, or the dirty beaches.

It is this niche that private explorers like Rover Adventure Club, The Globetrotters, etc are using to expand tourism, a neglected industry in Pakistan. The clubs take groups of 12-25 people each week to visit Hingol. One can find countless packages ranging between Rs2,500-3,000 for a day trip via the Makran Coastal Highway. The highlights include viewing the Princess of Hope, the Sphinx, and mud-volcanoes, as well as visiting the Kund Malir Beach and Hingol River. The area has varying geographical features from arid sub-tropical forest cover, to sandy mountains, and an estuary along the Hingol River.

The presence of Hinglaj Mata, an avatar of Durga, is in a cave nestled between Kirthar Hills, on the banks of the river Hingol. The sacred site is taken care of by the devotees of Devi, who are very friendly and welcoming of all visitors. Since the site has restricted access and is a haven for pilgrims, even wildlife seems to find it a safe house.

Walking around the premises of the temple can be a delight for a bird-watcher as one can spot feral pigeons, plovers, black bittern, long-billed pipit, brown-necked raven, plovers, and bulbuls, etc. If one has a keen eye, it’s possible to spot a few reptiles, including the Indian fringe-fingered lizard and the sand-swimmer. Though the wildlife department does not report sighting snakes in the area, temple devotees speak of their presence due to the abundance of mongoose in the canyon.

“We have seen snakes and mongoose both. We know mongoose and snakes are bitter enemies, but these two live in the same habitat,” one of the lady devotees of Nani Mandir said on a recent visit.

Another highlight of the visit is the Sindh Ibex or Turkman wild goat that abounds the anticline Kirthar Mountains in and around the temple premises. These stocky goats have thick-set bodies and strong limbs and hooves which enable them to climb up and down the almost upright hills.


However, the fate of this natural habitat for many of the protected wildlife species, including the natural heritage of the province has been put on stake by the Balochistan government, as well as Pakistan’s Space and Upper Atmosphere Research Commission (SUPARCO).

In a conversation with an official, it was revealed that the 9,000 acres (14.06 square miles) of land allotted to SUPARCO would be used for research purposes (probably launching satellites). The land, owned by the Forest Department was handed over under the Balochistan Protection and Preservation of Forest and Wildlife (Amendment) Bill 2015, passed by the Balochistan Assembly on November 9, 2015.

SUPARCO already owned an area Ras Malan in Hingol National Park, which it said was dedicated for developing indigenous Polar Satellites under the National Satellite Development Programme. The space commission claimed the area would be better preserved as activities would be restricted. 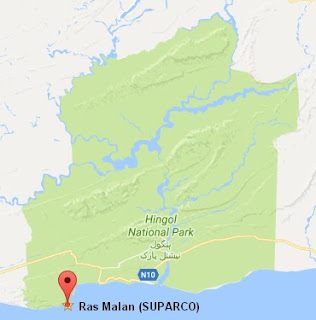 Laying claim to protected areas by the sensitive agencies is not a new phenomenon in Pakistan. In 2006, Pakistan Air Force as well had applied for 23,000 acres of land in the protected nature reserve.

It must be mentioned here that earlier, PAF not only acquired land in Maslakh Wildlife Sanctuary, Pishin, established in 1968, but also managed to wipe out the protected urial and chinkara from the sanctuary.

Same was the fate of Khadeji Falls, which is about an hour away from Karachi. A family who tried to visit the site in 2008 were told by uniformed men to not get any closer or else they would be shot.
Posted by Andaleeb at 5:45 AM