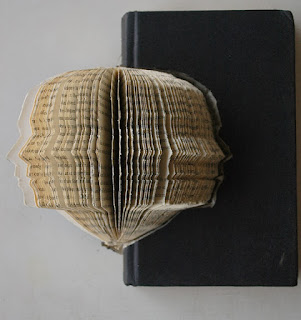 KARACHI: Keeping true to its commitment of bringing together different artistic narratives and allowing dialogue between cultural perspectives, Artchowk The Gallery inaugurated a solo exhibition ‘Piercing Silence’ by Fraz Mateen on Monday.
The exhibition revolves around existentialism, as the artist keeps trying to find a true identity. Fraz Mateen is a sculptor, who works with latex, wood, fibreglass, terracotta, marble, stone and paper, using processes like moulding and casting, welding, carving and wood construction.
Perhaps the diversity of materials, mediums and methodologies Fraz employs, is also a manifestation of the big question of his collective identity crises. Even the title of all his artworks is ‘ID’ along with a number, explaining his concept aptly.
The multiple IDs that he has sculpted are mostly carved on paper, depicting the numerous faces we all posses on different occasions, in diverse environments.
An art piece titled ‘My Life in Heavy Metal’ - carving on paper – is a strong conceptual 3D of the multifacetedness of a person, being born in a particular setting, at a given time.
Or as in the artist’s words, “One changes identities depending on which group of people one is with.”
When Fraz was asked about his favourite piece, a tricky question for a creative individual, he took a while to say ‘ID-4’, which is also a carving on paper, measuring 10.25 x 7 x 7.5 inches. The sculpture is a head lying on a telephone directory from 2007, as if listening to the secrets it carries. “We use a directory to search for people, places and their contacts,” he said, while talking about how, the place where one was born affects their character development.
Fraz speaks about how we correlate each of our identities to synchronise. Mentioning his own behaviour at work and home he states that although it is a necessary act, the question about ‘one true identity’ is left hanging in the air.
The society, or environment shapes who we are in even a fraction of a moment. Fraz said, “A force is asserting a collective identity and an individual has to compromise at times to come to terms with it. This compromise leads to a silence, which is piercingly present everywhere.”
The title of the exhibition, ‘Piercing Silence’ and Fraz’s works remind of ‘Castlevania: Portrait of Ruin’, an action video game developed and published by Konami, a Japanese developer and publisher of numerous toys, trading cards, anime, tokusatsu, slot machines, arcade cabinets, video games, as well as health and physical fitness clubs in Japan.
Incidentally or otherwise, ‘Piercing Silence’ is a song composed by Michiru Yamane for Castlevania: Portrait of Ruin. And though Fraz is not a gamer, his work, dealing with identities is very close to that of 3D role-playing games, where one keeps changing their roles and characters.
“I find these collective or group identities very interesting and how an individual has to manage and juggle these. As much as these are necessary for coexistence, they also create a drawback and that same individual at the end of the day is left wondering, which is his true identity? Maybe this is a process of self-discovery and a process of carving a true identity among different ones,” claims his statement.
Speaking of carving, Abdullah Qamar of Dhaba Art Movement considers Fraz’s work and skill exceptionally sensitive. “He has a good grip, and the finishing has been handled very properly. Fraz understands the mediums very well, and his compositions are brilliantly made.”
Abdullah said he was impressed with the way the artist turned paper into sculpture. “When we think of paper, we think in two dimensions, but Fraz has given paper a third dimension. Paper cannot be chiselled,” said Abdullah, while relating that Fraz uses surgical and cobbler’s tools to carve the basic form, and later uses a mini-grinder for finishing.
The artist completed his Diploma in Fine Arts from Karachi School of Art in 2006, majoring in Sculpture. He has displayed his work at Karachi School of Art Thesis Display and Emerging Talent at VM Art Gallery in 2006, as well as at Faculty Art 3 at IVS in 2008.
The exhibition will continue until December 10.

Published in Daily Times in November 2013.
Posted by Andaleeb at 7:45 AM